MK Avi Moaz said on Wednesday his anti-LGBT Noam party would renew its union with far-right Religious Zionism and Otzma Yehudit, with the alliance to be called Religious Zionism, forgoing a solo run. The development came after Likud leader Benjamin Netanyahu put personal pressure on spiritual leader Noam to do so.

“After a long meeting with the party rabbis, it was decided to comply with former Prime Minister Benjamin Netanyahu’s request to join the union under Religious Zionism and take 11th place,” Maoz said in a statement. communicated.

Netanyahu earlier Wednesday met with Rabbi Zvi Tau, the spiritual leader of Noam, and urged him to unite his ultra-conservative faction with religious Zionism and Otzma Yehudit ahead of the November 1 elections, Hebrew media reported. Although Tau apparently did not commit to Netanyahu after two hours of talks at the rabbi’s home, the party eventually agreed.

Last month, Netanyahu brokered a deal for Religious Zionism and Otzma Yehudit to run together again.

The election is likely to produce another political stalemate, with no bloc having a clear path to form a majority in the 120-seat Knesset. With competition so tight, Netanyahu, whose Likud party leads a right-wing religious bloc expected to win 57-61 seats, is seeking far-right unity to prevent votes being lost to parties who will not obtain the 3.25% threshold for entering parliament. Netanyahu needs at least 61 seats in his bloc to win another term as prime minister.

Earlier this week, Maoz, Noam’s only Knesset member, said the party would run independently in the election due to what Ynet reported was unhappiness at being offered the 11th. place on the combined list.

Religious Zionism, led by MK Bezalel Smotrich, was preparing to officially submit the joint list later in the day. The parties have until Thursday to finalize their lists for the election.

Religious Zionism had said earlier on Wednesday that Noam was alone and criticized the move.

“Unfortunately, Noam will not be joining our union and has announced a separate and irresponsible race that will endanger the right-wing bloc,” the party said.

“The victory of the right and the struggle for the country’s Jewish identity forces us not to take any chances of wasting votes that could lead to a progressive left government under [Prime Minister Yair] Lapid,” the statement read.

Maoz had announced the split earlier in the week, saying Noam had decided to run as an independent – despite the strong likelihood that he would not cross the electoral threshold – citing “unequivocal pleas from our many supporters”.

Netanyahu successfully brokered the alliance between Ben Gvir’s Otzma Yehudit and Smotrich’s Religious Zionism following Ben Gvir’s short-lived decision to run separately, due to a dispute with Smotrich over the composition of their electoral list.

“In this election, we will choose whether we want to be a dark, exclusive and racist country or a country that generates moderation and tolerance and above all equality,” she said in a statement. 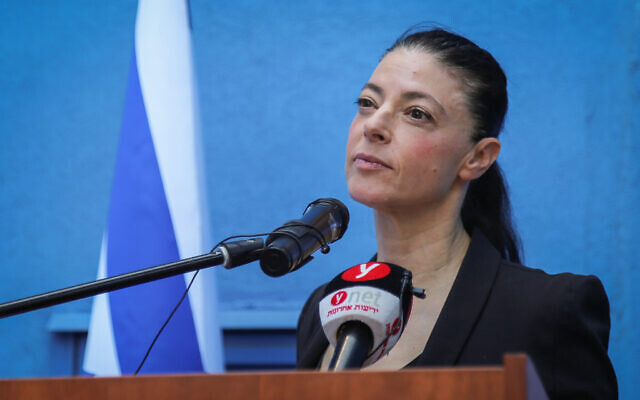 Zehava Galon, leader of the left-wing Meretz party, also criticized Netanyahu for his meeting with Tau and suggested the former prime minister would do anything to return to power, ahead of his ongoing corruption trial.

“It’s interesting to see which Bibi will sell out first to evade justice: women or the gay community,” she tweeted, using Netanyahu’s nickname.

Noam burst onto the political scene in 2019 with a series of provocative highway billboards and video ads with the slogan “Israel chooses to be normal.”

The party says the LGBT community has “imposed its agenda” on the rest of Israeli society. A 2019 campaign video compared Reform Jews, left-wing activists and gay rights activists to Nazis and Palestinian suicide bombers, saying they “all want to destroy us.”

The party merged with Otzma Yehudit before the September 2019 elections, but did not cross the threshold. It then ran independently ahead of the March 2020 election before dropping out a few days before the race.

Finally, he merged with Otzma Yehudit and religious Zionism, under intense pressure from Netanyahu ahead of the 2021 elections, garnering enough votes for Maoz to become the first member of his party to enter the Knesset.

You are a dedicated reader

We’re really glad you read X Articles from The Times of Israel over the past month.

That’s why we started The Times of Israel ten years ago – to provide discerning readers like you with must-read coverage of Israel and the Jewish world.

So now we have a request. Unlike other media, we don’t have a paywall in place. But since the journalism we do is expensive, we invite readers to whom The Times of Israel has become important to support our work by joining The Times of Israel community.

For just $6 a month, you can help support our quality journalism while benefiting from The Times of Israel WITHOUT ADVERTISINGas well as access Exclusive content only available to members of the Times of Israel community.

Thanks,
David Horovitz, founding editor of The Times of Israel

Already a member? Log in to stop seeing this