Photo taken on April 22, 2021 shows a portrait of Vladimir Lenin during a flower-laying ceremony at Lenin’s Mausoleum to mark the 151st anniversary of the revolutionary leader’s birth in Moscow, Russia. Photo: Xinhua 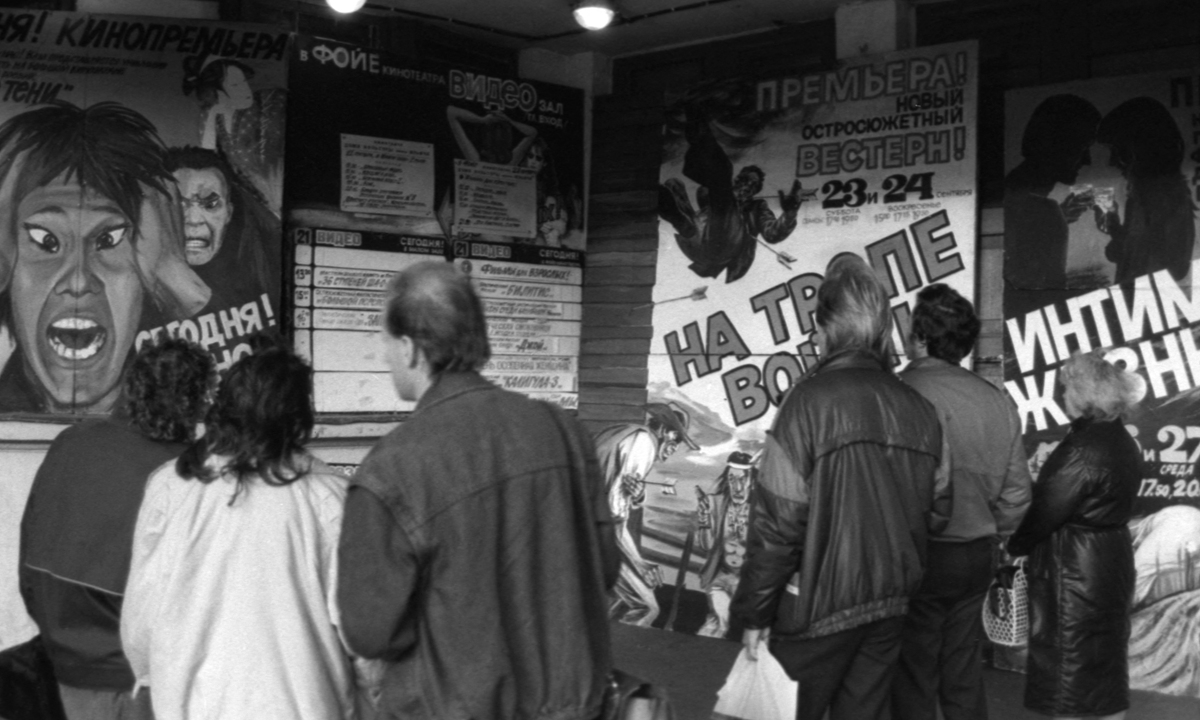 Residents of the Soviet Union watch posters in a private video room in 1988. Photo: AFP

The former socialist superpower the Soviet Union (USSR) collapsed on December 25, 1991, while China, a great power which chose the path of socialism with Chinese characteristics different from that of the USSR, became largest economy on a purchasing power parity basis. It is also the most powerful and successful socialist country on the way to achieving modernization and industrialization without choosing the Western capitalist model, as well as â€œthe most important strategic competitorâ€ in the eyes of the United States.

The Chinese have mixed feelings about the collapse of 30 years ago, as they sympathize with the Russian people who have consequently suffered a series of tragedies, but they also find that the collapse of the red giant is a very valuable lesson for China to continue to develop and improve. socialism with Chinese characteristics.

Just as there is much discussion among observers and academics around the world, there has been much discussion of the legacy of the collapse of the USSR from Chinese pundits, commentators and ordinary people on Chinese media and social media platforms in recent days, but their voices are quite different. westerners.

Presenting the United States as the “winner” of the Cold War, many media and academics in the United States and other Western countries attempt to attribute the collapse of the USSR to its socialist path, claiming that his choice caused errors such as military expansion, the Great -Chauvinism in power and the failure of economic reform.

But a dominant view in China is that socialism is okay and that it was effective in helping the Soviet Union defeat fascism and build a superpower. The error lies in the fact that the leaders of the USSR after Joseph Stalin strayed from the path of socialism and even betrayed the path and the people of the Soviet Union, Chinese experts said, stressing that China’s success today has further reinforced the correctness of this view. .

Li Shenming, former vice president of the Chinese Academy of Social Sciences, told the Global Times that â€œthere are many different explanations around the world as to why the Soviet Union collapsed, but which one argues that “Stalinism” or “the Soviet Union model” is the root cause which continues to dominate.

â€œBut in China, we have reached common ground after much research and discussion that Stalinism is not the root cause, and the real reason is that, from Nikita Khrushchev to Mikhail Gorbachev, the leadership of the Soviet Union gradually deviated and ultimately betrayed Marxism, socialism and the fundamental interests of the overwhelming majority of the people, â€Li noted.

Blaming Stalin, or the socialist model built by Lenin and Stalin, for the collapse of the Soviet Union is irresponsible, Li said. â€œAlthough the model was not perfect and needed reforming, the Union Soviet achieved great goals such as industrialization, victory in World War II and successful post-war reconstruction under this model, â€Li said.

The starting point for the collapse of the Soviet Union was the reform initiated by Khrushchev, because it did not solve the problems. Instead, he gradually denied the basic political and economic system of socialism in the Soviet Union, and in Gorbachev’s time the country’s rulers completely betrayed Marxism and chose a path of no return, took said the experts.

The leaders of the Soviet Union not only betrayed their initial aspiration, but also forgot that serving the people was their main mission, rather than getting entangled in power struggles with other countries, intimidating and threatening their comrades in the within the socialist bloc, including China, continuing military expansion and even invading other countries like Afghanistan, Chinese analysts said.

â€œThe Soviet Union could send satellites into space and expand its geopolitical sphere of influence, but it could not solve its problems of shortages of food, textiles and basic necessities, which still fueled social conflicts, “said Wang Xianju, deputy director and researcher at the Renmin University of China – Russia Russian Research Center of St. Petersburg State University, told the Global Times.

The Chinese Communist Party (CCP) has always emphasized that the all-round developments and achievements that we have achieved and are paying for efforts to achieve them have only one basic purpose: to serve the people, Wang noted.

The leaders of the Soviet Union also wanted to fix the problems, but they mistakenly believed that liberalization or westernization could fix everything for their country. Figures like Gorbachev or former President Boris Yeltsin embraced the Western capitalist political system and ideology and ultimately buried the great country that was built by their predecessors, Li said.

The disintegration of the Soviet Union is “a vaccine for China,” said Hu Xijin, a Global Times commentator, as he continues to tell China what is wrong and which path is a dead end, and what type reform will lead to the death of a great country and a great party.

The unfortunate memory of Russia with the United States and other Western countries after the collapse of the Soviet Union is another vaccine for China, “because it tells us that Russia will not be accepted by the ‘The West even when it gives up socialism and disintegrates its own country to pieces, “said a Beijing-based international relations expert who requested anonymity.

“The struggle with the West is not primarily a question of ideology or ‘human rights and freedom’, it is a question of power and geopolitics, and ‘suicide’ like the Union Soviet did so will not stop hostility from the West, but will only bring setbacks, chaos and civil wars and more military expansion of the West, â€he noted.

Will the United States repeat the path of the USSR?
China has learned from its lesson and avoided repeating the mistakes made by the Soviet Union to achieve successful development. As they continue to march towards their goal of national rejuvenation, the United States, the competitor of the Soviet Union which believes it has won the Cold War, is likely to repeat many mistakes made by its former rival, said Chinese and Russian analysts.

On the eve of the anniversary of his resignation as leader of the former Soviet Union, Gorbachev told state news agency RIA Novosti on Friday that Washington had become “arrogant and confident” after the collapse of the Soviet Union, leading to the expansion of the NATO military alliance. However, he welcomed the upcoming security talks between Moscow and Washington.

Responding to the question of whether it was possible, after the collapse of the USSR, to forge relations with the United States in another vein without undermining the sovereignty of Russia, the former Soviet leader raised “the triumphant mood in the West, especially in the United States” after the The Soviet Union ceased to exist in 1991.

“They became arrogant and self-confident. They declared victory in the Cold War,” Gorbachev said. He insisted that it was “together” that Moscow and Washington brought the world out of the nuclear confrontation and race. “No, the ‘winners’ decided to build a new empire. Hence the idea of â€‹â€‹NATO expansion,” said Gorbachev, adding that “How can one count on equal relations with states? -United and the West in such a position? “

Russian President Vladimir Putin said in June that he was convinced the United States was following the typical scenario of an empire: Confident in their unlimited power, empires create unnecessary problems for themselves until they can. no longer deal with it, TASS reported.

“Do you know what the problem is [of the US] is? I’ll tell you, as a former citizen of the Soviet Union. The problem with empires is that they think they are so powerful that they can afford little inaccuracies and mistakes, â€he told the media.

In his words, the rulers of the empire are convinced that they can intimidate, persuade or buy the loyalty of nations or groups, and they believe that all their problems can be solved this way.

â€œBut the problems keep piling up. And, at some point, they are no longer able to cope with them. And the United States is now walking in the path of the Soviet Union, and its walk is confident. and regular, â€added the Russian leader.

We found interesting similarities between today’s United States and the former Soviet Union in the 1970s-80s, the period before disintegration, the anonymous Beijing-based expert said, and he listed some similarities such as “the abuse of power in military expansion, gerontocracy, overconfidence in one’s ideology, inability to correct mistakes and not push for any effective reform, but being anxious to blame other countries for one’s own mess and pursue a competition of great powers motivated by a cold war mentality. He said if the United States failed to uncover this problem, it would most likely repeat the tragic fate of the Soviet Union.